over his successful career, it is not until he defends Mr. George that he begins to unravel.

Through Mr. George -- a man accused of killing his wife whom he has physically abused

suppressed memories of his own abusive father and tarnished childhood. To keep from

those of his other client’s, Ted Johnson takes pencil to paper and expels his demons by

writing about the heinous murders of passion, revenge, jealousy and lust that ironically

mirror events from his turbulent past.

Be sure to follow submission directions to the letter.

attorney who specializes in murder cases. He is ambitious and sometimes uses the chip

crimes. He is the youngest of 7 children. He grew up in a home with old fashion values

with a loving mother and abusive father who had his fair share of extra marital affairs.

Ted harbors resentment and depression from his childhood. A charming womanizer, he

finds it hard to commit after his divorce resultant from a 7-year marriage. He is loyal to

his friends and dedicated to his loved ones. (No nudity but must be comfortable in

boisterous jokester and Ted’s moral compass, who can hold his own in a heated debate.

Married with three kids, Walter is a criminal defense attorney. A former athlete with a

MOSES WARD African-American Male (late 20’S). A good friend to Walter but merely tolerated by Ted. Very upbeat, anxious and excited about his new found profession and all the perks that come with it, Moses loves women, money and fast cars. Married with two kids and a third on the way, Moses was known to cheat on his wife. Moses was extremely smart, but would dumb himself down to fit in with his childhood friends that were recording artist with a hit song. Moses has a secret addiction to drugs and alcohol.

ERNEST HOLMES African American Male (30’s) He’s average looking male, short – a little on the meek side. He is an attorney and one of Ted’s close friends. He

finds out his wife is cheating and she is pregnant by another man.

She is unhappy in her marriage and has been seeing another man.

slender with a nice body. Smart, ambitious and career minded, She works for the D.A.’s

office and works hard to fit into a boy’s world. She flirts with Ted occasionally just to get

a rise out of him, in hopes he’ll give away info when they work against each other in

court but her real interest lie in Victor Rodriguez.

CHARLES OGLETHORPE African-American, Male (MID 40’S) stocky, round body successful entertainment lawyer. A millionaire, Charles lives in a mansion Charles is very well connected in government, entertainment and any other person on the Who’s

Who’s making money in Atlanta. Married with at 2 kids, Charles throws an annual

Christmas party and the who’s who of Atlanta attends.

JUNE SKY Bi-Racial, (mid-30’s), tall, bi-racial and speaks in a no nonsense rather

direct sort of way. Her sense of humor is quick witted and dry. June is new to Atlanta

and works in Ted’s building for James Cutter, a celebrated criminal defense attorney. She

is a single mother who is struggling to put her life back together after being sent to prison at age 18 for conspiracy to distribute drugs. She completed college and University of Chicago law school after being released from prison.

considered better then her. Despite her resentment she kept June’s daughter while she

troublemaker and bully to the much younger smaller January. Zoe is indeed jealous of her

Grandmother’s attention to her younger cousin January. A manipulative Zoe has learned

how to cause friction between Helen and June.

JANUARY Bi-Racial, 6 year old daughter to June. Like any kid, she is dependent on her mother who is very over protective of her. January is unaware that

June has served time in prison. Perceptive, loving and honest January doesn’t understand why her cousin Zoe is always mean to her.

and the granny to Zoe and January. Sabrina is a no nonsense mother. When she walks in

the room her girls know they better straighten up. She is very accommodating to June

since her release from prison and wants Helen to do the same. Always the peacemaker

between June and Helen, Sabrina is beginning to see an ugly side of Helen that she never

glasses is seeking to run for governor. He’s arrogant and mean. He wants to be governor

and is courting the black churches and leadership in Georgia particularly Atlanta. He

comes off as a snob. He comes from a long line of plantation owners but he wants to

flag and getting fortune 500 companies to move their busy to Georgia. He considers

ivy leaguer, southerner without the accent. He’s tall, quick witted and cautious with his

words around King Lloyd as to not set him off. His giant, lofty, ambition, at times

empathy to his victims. Culpepper admires King Lloyd because he feels that he’s found

not only a mentor but a kindred spirit. To the contrary, Culpeper will become confused,

when the humanity in Lloyd is revealed.

of Latin decent, Rodriguez is smart, calculating and smooth, as he also doubles as a

hostage negotiator for Atlanta police. A single dad, Rodriguez is as protective about his

private life as he is dogmatic about his homicide investigations. He is in a fierce custody

battle with is ex-wife over his daughter. His daughter means the world to him and he will

work 3 jobs to pay child support and keep his ex off his back. He notices Stella is

showing him attention and is somewhat intrigued but is distracted with is personal issues.

older. Cutter has a very unique voice in that he sounds like he’s from the sixties. Bald,

fit and very focused Cutter and Ted have a mutual respect for each other’s legal mines.

Cutter is married with children; he’s big on volunteer work and helping others.

Originally, from Miami Florida, Cutter has a passion that runs beneath the surface that

can be very dark. A passion most people don’t understand and never want to see.

repair and shine shop in his sixties an ex-convict, who did some federal times when he

was in his twenties. Remarkably brilliant, Mr. Benny knows facts about people, places

and thing that people don’t think he should know. Ted has adopted Mr. Benny as his

counsel to better understand what’s around him. Mr. Benny knows of Ted’s needs and

fills the void for him.

These are PAID NON UNION opportunities

ENTER the CHARACTER you are submitting for in the SUBJECT line. 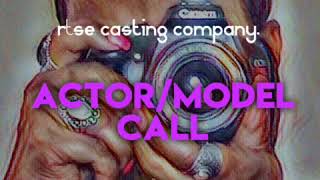 Casting Web~Series: Just Beyond the Spotlight

Let's Talk About It Tuesday